Use this plugin to filter and import MAME Software Lists into LaunchBox.

Features:- Choose to import clones as Additional Apps, separately or not at all
- Skip Prototypes (filter option)
- Skip Non Supported games (filter option)
- Import the selected (filtered) Console/Computer games into LaunchBox
- Adds the appropriate command to each imported games' Command Line (ex. a2600 -cart)
- Copy the filtered selection of roms to a separate folder (optional)
(After copying files, they will automatically be imported)
- If a newly imported game is tagged as not supported by MAME, it will be marked as "Broken".
Will also check existing games in the Platform being imported to (in case MAME updated its' status)

*v4.0  New feature:   Import only rom Titles that exist in your Source Folder.

When you check the "Import only games that exist in the ROMs Source Folder" box, only those Titles will be imported. This will not remove any existing entries in LaunchBox.  Only add new ones or modify existing ones (per MAME changes in the hash file).

*New v3.0
- New Audit Feature.  Compare your existing softlist Platform against the MAME hash.xml.
Will cross check Title and Rom names.
- Select the respective hash.xml and Platform
- Click Audit (last page)
- Any differences along with a brief description will be shown.
- Option to select files (if any) and have them removed from your LaunchBox Platform.
- Will check main Titles as well as Additional Apps (if you imported them that way).
This does NOT check rom integrity. That's between you and Clrmamepro (or related utility).

What's needed:
- (2) dll files included in the zip file Starting with v2.0, only need the (1) dll file included in the zip.
- MAME Software List hash files (located in the "hash" sub folder of your Mame's main folder)
- MAME Software List roms* and BIOS files (only if you want to actually play them)
*The rom set needs to be either a Split set or a Non-Merged set for a full import
- If you plan to not import clones, any type set will work.

What it won't do:
- Filter/Sort by Region (it's a MAME hash file limitation)
- Determine if/what BIOS files are needed
- Import Metadata and Media (just use LaunchBoxs' built-in Tool)

How to:
- Copy the "ImportMameSoftwareLists" folder from the zip file to your ..\LaunchBox\Plugins folder.
- Navigate to that folder and unblock the 2 dll files.  (Right click, Properties, and click Unblock)

Note:
- The "Destination Folder" is required even if you don't plan to copy the files.  It's needed to set up the Application Folder for the games when Importing.

This file needs to be located in the same folder as the plugin (..\LaunchBox\Plugins\ImportMameSoftwareLists\) and can be download from: http://www.progettosnaps.net/mess/

These files are [relatively] large (24MB+) and will slow down the screen updates when selecting different consoles/computers.

Use "Shrink_MESSxml.exe" to reduce the mess xml file size to a little over 1MB to eliminate slow screen updates.  (April-2020 V2.0 is available. Reduces file size even more.)  After 1st making a backup, it then removes unneeded data from the xml file.  Place only the one 'shrunken' xml file in the plugin folder.  ..\LaunchBox\Plugins\ImportMameSoftwareLists\mess215.xml  (a 'shrunken' mess215.xml is included with v1.30)

The Import Mame Software Lists plugin will search for "mess*.xml".  So as you update, just replace the old xml file (mess215.xml) with the new one (mess216.xml).

ONLY HAVE ONE MESS XML FILE IN THE PLUGIN FOLDER AT A TIME!

For easiest integration with MAME, place all Software List folders inside a single directory (i.e. "software") and name them the same name as their respective hash xml file_name.  For example:

Now, all you need to add to mame.ini in "rompath" is "software".  You don't need to worry about any of the Software List sub-folders.

Assuming you still have both boxes checked ("Don't use quotes..." and "Use File name only..." in the MAME emulator settings, you'll be able to lauch these without problems*.

The command lines that get placed in MAME - Associated Platforms come from hash files. However there are a few that will need to be manually edited. A couple I'm aware of are: 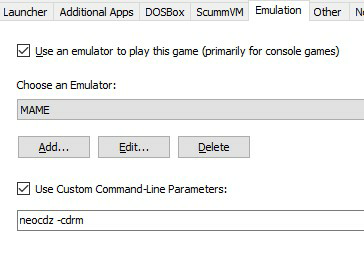 This plugin can help put that in there for you.  If someone knows how to get it to work otherwise, please let me know so I don't have to look like I'm pimping my other plugins.

MAME will run (when supported) CDROMS by simply pointing the application path to the game's folder rom_name.  You do not need to point to the chd file to run it.  (Note: the plugin will have it point to the folder_name.zip, but with the checkbox "Use file name only..." checked, it takes off".zip".

If you wish to import CDROM games into LaunchBox for use with a different emulator, you will need to have the application path point to the games actual file_name.chd.

New Feature: When the plugin sees that the media type is CDROM, you'll be given the option to import the roms for "use with an emulator other than MAME" (Choose "Yes").  If you'll only be using them with MAME, choose "No".