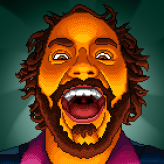 Hey everyone, so I'm (slowly) working on a new theme inspired by the aesthetics of "New Retro Arcade Neon". Up to this point I've only done the platforms that I currently have myself. This

Thanks so much everyone, I really appreciate all the kind words! I'll hop back on here in the next day or so to get everything figured out, and uploaded. Thanks for everyone's support!&#13

Hello guys, I am well motivated for beautiful skain work, I have already done some tests with my nostalgic bedroom, and after letting me animate these drawings in theme rachid lotf  the immense kind