Some controller images supplied. This is not a complete collection you will have to source/make your images. The theme is mainly designed for those that will create their own mapping images or those that have them already and want a way to show them without having to override the current LaunchBox image files.

NOTE: All images must be placed in a specific folder structure and follow the standard LaunchBox naming convention to work with this theme. (SEE BELOW)

The theme looks for a .jpg. If you are using .png there is a ReadMe on how to edit the theme or you can change your image file extension.


3) All game specific control images must be named exactly as the game is named in your set-up or as the rom is name.
The image must then be placed inside a folder that is named exactly as the platfrom is named and the folder must be placed in the Game Controls location.
Game Specific Controls folder example: (Example Sony PlayStation platform: \Launchbox\Images\Game Controls\Sony PlayStation\ ).
The control image for the game specific is placed in the above folder folder:(Example Alien Trilogy for Sony Playstation: \Launchbox\Images\Game Controls\Sony PlayStation\Alien Trilogy.jpg)

I have included @OhBoy controller images with his approval. You can download what he has created here. He also has a Pause and Startup theme. 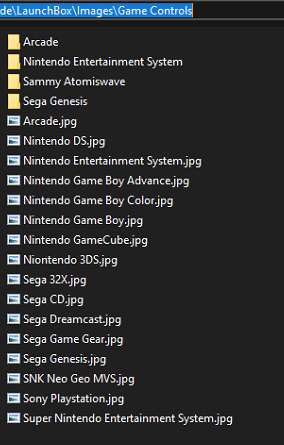