Creating a Playlist from a folder/Default emulator help 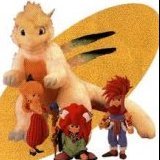