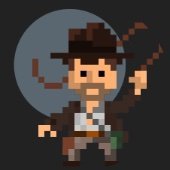 This pack contains 2D Box Art for all 60 of the "Nintendo Game & Watch" Titles (56 are currently emulated in MAME) with 98% of them made from original hi-res box scans and / or photos. When trying to import the Nintendo Game & Watch platform I realised that many of the exisiting but still very cool scans or images of the original boxes were missing or needed some love, so I decided to create my own set of box art from scratch for both 2D and 3D versions.

Some of the original boxes and box scans are understandably in pretty rough shape after four decades, so I've cleaned them up a substantial amount but there are still some imperfections which I left there to preserve the original box as much as possible. So expect some folds, creases, tears, sticky tape residue and smudges but I think it gives them all a bit of character

I'll update if I can source some really good quality scans of less battered cartons.

When I started this I probably didn't realise there was so many different sized boxes used depending on the game or series so I've done my best to represent these as authentically as possible whilst keeping a consistent width and reasonable file size. Files are currently named as per MAME 0.231 (with a few guesses for future titles)

This is a the original prize box from the Famicon F-1 Grand Prix tournament which also contained the Disk-un case. A huge thanks @FoxyMonty for the rare and clean box photos!