Resolved - Should ScummVM be removed as a Platform from the DB? - Informational 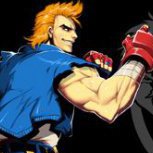 By FistyDollars,
July 30, 2016 in Troubleshooting